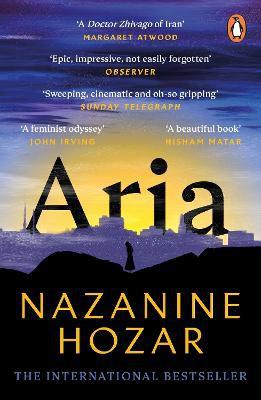 THE INTERNATIONAL BESTSELLERbr>br>''A sweeping saga about the Iranian revolution as it explodes . . . a Doctor Zhivago of Iran'' Margaret Atwoodbr>_____________________________________br>br>1950s Tehran. In an alleyway an abandoned baby cries into the night, attracting the attention of the young man who will save her.br>br>And so begins the story of Aria, an orphan girl who comes of age on the volatile streets. As Aria grows she is torn between the three women fated to mother her: the harsh wife of the man who rescued her; a wealthy widow, who offers her refuge but cannot offer her love; and the mysterious Mehri, whose secrets will shatter everything Aria thought she knew about herself. And then, just as the political turmoil in the country deepens, Aria falls in love with a boy caught on the wrong side of the revolution . . . br>br>''Sweeping, cinematic and oh-so-gripping'' Sunday Telegraphbr>br>''Leaves you simultaneously heartbroken and full of hope'' Sunday Timesbr>br>''Warm-hearted, compelling, hugely enjoyable'' Timesbr>br>''Spellbinding'' Mail on Sundaybr>br>''Explores the darkness and hope of a city on the brink of revolution . . . Epic. An impressive debut, not easily forgotten'' Observer>