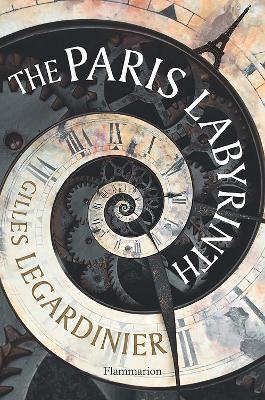 Ingenious illusionist Vincent embarks on a thrilling adventure in turn-of-thetwentieth century France to unlock the mysteries of the past in a quest for lost treasure. Along the way, he battles against dark forces as he tries to discern who he can trust in a race against the clock.
Vincent, more than anyone, knows what it means to keep a secret. With his troupe of talented craftsmen- the only family he has-he designs hidden compartments for priceless treasures and passageways for undetectable escape routes. The rich and powerful who hire him pay handsomely for his work, and for his discretion-they know only his first name, and his business is strictly wordof- mouth.

As Paris celebrates the 1889 World's Fair, the city fills with visitors who come to see the controversial new Eiffel Tower with its gravity-defying escalators, to tout their latest inventions, or to scout for prospective investment opportunities. Vincent takes on an urgent mission so secret he doesn't tell anyone about it. Suddenly, he and his team become the target of assassination attempts.
In a race against time, as death licks at their heels, they puzzle over who could be behind the violence. Is it one of their clients trying to erase the secrets they had been hired to conceal? Has their work somehow provoked the dark forces of the occult? Who is this faceless adversary, lurking in the shadows, ready to strike them anywhere, anytime?
Confronted with mysteries uncovered from the past, and a life-or-death challenge that tests the limits of his ability, Vincent will do everything in his power to thwart the menace and protect his friends ... if only he can survive.
What he is about to discover will shatter everything he thought he knew about the world....